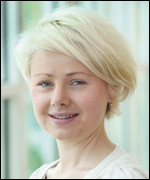 Title: No effects of gluten in patients with self-reported nonceliac gluten sensitivity after dietary reduction of fermentable, poorly-absorbed, short-chain carbohydrates.

ABSTRACT
Background: Patients with non-celiac gluten sensitivity (NCGS) do not have celiac disease but their symptoms improve when they are placed on gluten-free diets. We investigated the specific effects of gluten after dietary reduction of fermentable, poorly absorbed, short-chain carbohydrates (fermentable, oligo-, di-, monosaccharides, and polyols [FODMAPs]) in subjects believed to have NCGS.

Methods: We performed a double-blind cross-over trial of 37 subjects (aged 24-61 y, 6 men) with NCGS and irritable bowel syndrome (based on Rome III criteria), but not celiac disease. Participants were randomly assigned to groups given a 2-week diet of reduced FODMAPs, and were then placed on high-gluten (16 g gluten/d), low-gluten (2 g gluten/d and 14 g whey protein/d), or control (16 g whey protein/d) diets for 1 week, followed by a washout period of at least 2 weeks. We assessed serum and fecal markers of intestinal inflammation/injury and immune activation, and indices of fatigue. Twenty-two participants then crossed over to groups given gluten (16 g/d), whey (16 g/d), or control (no additional protein) diets for 3 days. Symptoms were evaluated by visual analogue scales.

Key Results: In all participants, gastrointestinal symptoms consistently and significantly improved during reduced FODMAP intake, but significantly worsened to a similar degree when their diets included gluten or whey protein. Gluten-specific effects were observed in only 8% of participants. There were no diet-specific changes in any biomarker. During the 3-day rechallenge, participants’ symptoms increased by similar levels among groups. Gluten-specific gastrointestinal effects were not reproduced. An order effect was observed.

Conclusions: In a placebo-controlled, cross-over rechallenge study, we found no evidence of specific or dose-dependent effects of gluten in patients with NCGS placed diets low in FODMAPs.